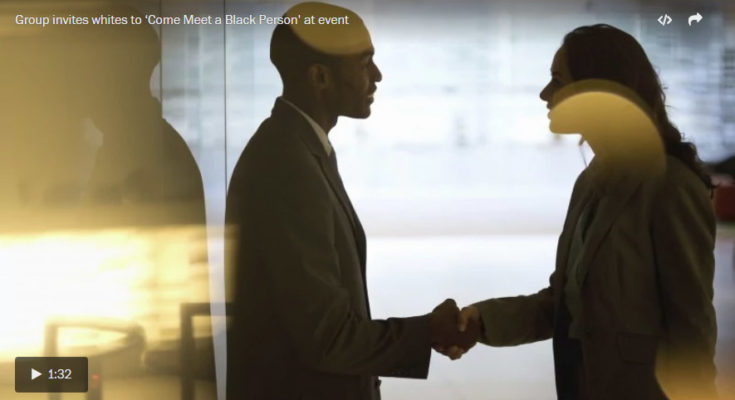 People in Lawrenceville, Ga., have been invited to come together Thursday for a two-hour networking event. They’ll get a name tag, go through introductions, eat comfort food such as chili and corn bread and — they’ve been told — they’ll get a chance to meet a black person.

Cheryle Moses, a black woman who founded Urban MediaMakers, a group for filmmakers and content creators, is sponsoring the “Come Meet a Black Person” event.

She told The Washington Post that she “wanted to do something different” for the group’s 16th anniversary. Cheryle Moses is the founder of Urban MediaMakers and organizer of the event “Come Meet a Black Person.”

“As a black person I deal with racism every day,” she said. “It’s a part of life. Nowadays I have become more fearful. I have never been afraid when it comes to race but now I am. And I don’t think I’m alone. I want to do my part to change things,” Moses told the Post.

The group specifically asks for white people who don’t have any nonwhite friends to attend.

Moses said that “many white people want to begin to cultivate relationships with black people but don’t know how to and this is an opportunity for them to feel comfortable.”

“The only way to change the divisiveness that’s going on is to be one-on-one with people. Policy won’t really change things, but forming relationships will.”

Since posting the event on Nov. 12, the response has been “phenomenal,” according to Moses. She told The Post that people from all over the country have called telling her how excited they are and that they want the event to come to other cities.

On the other hand, Moses said one woman called her screaming. According to Moses, the woman said, “I’m white but I have black family members. I work with black people. This is an awful idea.” Once Moses explained the event to her, the woman calmed down.

Some skepticism and sarcasm surfaced as well.

“This is not a drill,” wrote Breanna Edwards at The Root, a site devoted to topics of interest to African Americans. “And this is not our sister site The Onion . . .

In theory I get it. To some this may just be a really clever idea. And who knows, Moses’ dreams may just come true, and we get one step closer to a better world (insert cheesy song about healing the world here).

However, at the same time, it gives me the same icky vibe I get about black women who opt to put up signs and invite strangers to touch their hair.

We are not entertainment. We are not props. And this is certainly not the kind of sideshow I would want to be a part of. But there are far better, more patient people than I.

“I have never met a black person,” one person commented below Moses’s Facebook announcement. “What do you recommend I bring that they would like?”

Another user responded, “So this is what, to be put on exhibit? I’m sorry but I’m not coming to be one of their test dummies. We didn’t just get here and that’s their issue if they do not have diversity in their lives.”

During the event, people will participate in a cultural scavenger hunt to learn more about black history. Moses says she expects about 50 people to attend.

Read the original article at https://www.washingtonpost.com/news/morning-mix/wp/2017/11/15/come-meet-a-black-person-says-the-invitation-to-a-georgia-networking-event/