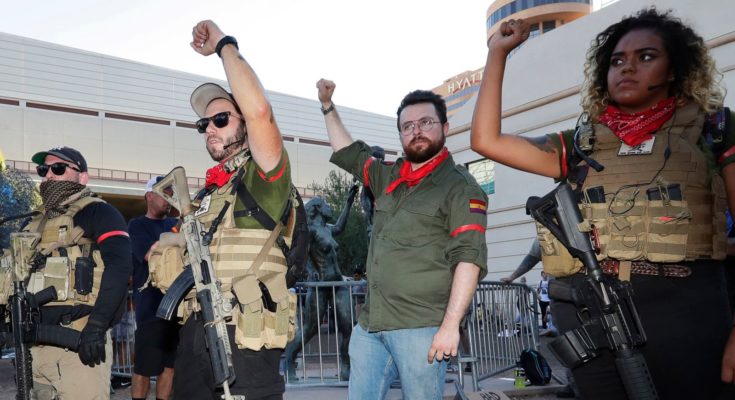 Have you heard of the Caucasian Panthers? Meet the white men who called themselves ‘rednecks’ who are all about the anti-racist life. Read about Redneck Revolt as written by Michael Harriot for The Root.

Members of the John Brown Gun Club and Redneck Revolt protest outside the Phoenix Convention Center on Aug. 22, 2017, in Phoenix. (Matt York/AP Images) On Dec. 4, 1969, law enforcement officers raided a home at 2337 Monroe St. in Chicago. First they killed Mark Clark, who sat by […]

The Caucasian Panthers: Meet the Rednecks Armed, Ready and ’Bout That Anti-Racist Life

On Dec. 4, 1969, law enforcement officers raided a home at 2337 Monroe St. in Chicago. First they killed Mark Clark, who sat by the door with a shotgun. Then they trained their gunfire on the south bedroom and opened fire. When the cops stopped firing, they pulled the 21-year-old chairman of the Illinois Black Panther Party out of the bullet-riddled room. After the officers noticed that he was still alive, they pumped two more bullets, at point-blank range, into the center of Fred Hampton’s forehead.

Some people say that the raid and assassination of one of the Black Panther Party’s brightest stars was in retaliation for a police shootout that happened days earlier in Hampton’s absence. Others attribute it to the ruthlessness of the Chicago machine to keep power at all costs. But there are others who point to the stated goal of J. Edgar Hoover’s Counterintelligence Program, or COINTELPRO, to “prevent the rise of a black messiah.”

Despite Martin Luther King Jr.’s protests, the March on Washington and activism, King was assassinated only when he reached beyond race and began talking about class and economics with his Poor People’s Campaign. Malcolm X was gunned down after he talked about including whites in the freedom movement.

Six months before his death, the charismatic Hampton and his Black Panther Party joined a group of people to organize the Conference for the United Front Against Fascism. Calling the conglomerate the “Rainbow Coalition,” the group included the Puerto Rican Young Lords and a group of Southern transplants who fashioned themselves after the Black Panthers. They had an 11-point plan similar to the Panthers’. They favored armed resistance. There was one major difference about the members of this group, which called itself the Young Patriots Organization:

“You have to find a way to show working folks that anti-racism is within the self-interests of working-class white people. And you have to do that with a culture.” —Zac Henson

I first met Zac Henson a few years ago when we were both invited to a forum in Birmingham, Ala., to talk about economic development. He has an unkempt beard and talks with a Southern accent as thick as Karo Syrup. He looks like a redneck. He sounds like a redneck. I figured that I would be the lone voice railing against the gentrification of one of the blackest cities in America, until he spoke up.

It turns out that Henson is a redneck. It also turns out that Henson is a UC Berkeley-educated economist and scholar with a Ph.D. in environmental science, policy and management and heads the Cooperative New School for Urban Studies and Environmental Justice. Henson doesn’t consider the term “redneck” a pejorative, and defines a redneck simply as “a white working-class Southerner.” He has been working for years to separate redneck culture from its neo-Confederate, racist past and redefine it according to its working-class roots.

The original YPO was led by William “Preacherman” Fesperman and made up of “hillbillies” from Chicago’s South Side. They saw the similarity in how the Chicago machine treated blacks and how it treated poor whites. Preacherman believed that solidarity was the only answer.

Modeled after the Black Panther Party, the YPO adapted the Panthers’ ideas into its platform. It used an 11-point plan (pdf) similar to the Panther Party’s 10-point plan. It opened a free health clinic like the Panthers. The YPO, too, was raided by the “pigs” (pdf).

Today the Young Patriots Organization is looking to build on the legacy interrupted by the death of Fred Hampton. It embraces the term “redneck” as a cultural term and wants to build a movement that fights racism the same way as the Black Panthers it modeled itself after almost five decades ago.

Hy Thurman, an original member of the YPO who is looking to resurrect the organization, says: “Racism was a demon that had to be driven out and slain if we were going to have unity with other groups and to believe that all people have a right to self-determination and freedom. … We had to change to make life tolerable, and for life to have some sort of meaning.”

Henson, Thurman and the YPO chapters across the country are using their history with the Panthers to fight racism, class warfare and oppression on all fronts, and they are rounding up unafraid rednecks willing to fight the power structure in any way possible.

“I saw thousands of Nazis … and every one of them had the same expression on their face: They looked like a 10-year-old boy who enjoys terrorizing things weaker than it.” —Shaun from Redneck Revolt

Perhaps the best known of the anti-racist redneck organizations is Redneck Revolt. Contrary to popular belief, Redneck Revolt is not the same as the newly labeled, all-encompassing leftist bogeyman everyone calls “Antifa.”

While they are decidedly anti-fascism, those who adhere to the precepts of Antifa consider themselves to be anarchists, while Redneck Revolt embraces organizing. Since its founding in 2016, it has organized dozens of branches in 16 states around the country, describing itself as a “national network of community defense projects from a broad spread of political, religious, and cultural backgrounds. It is a pro-worker, anti-racist organization that focuses on working-class liberation from the oppressive systems which dominate our lives.”

Antifa also seeks to destroy fascism by any means, including violence. Redneck Revolt’s mission, in contrast, is to protect its members and others. Redneck Revolt is not looking for a fight, but it is willing to fight. The organizers say they strongly believe “in community defense,” and their principles state:

We are not pacifists. Redneck Revolt believes in using any and all means at our disposal to gain our freedom and true liberty, provided those methods do not violate our basic humanity or integrity. We believe in the inherit right of every individual and community to defend themselves from those who exploit or oppress them. We believe in empowering each other to participate in the defense of our communities with the knowledge and equipment to do so. It is our duty and obligation to defend our families and communities by all means from those who profit from our misery and destruction, or call for violence against any of us for our race, gender, religion, country of birth, or cultural background.

Redneck Revolt calls itself an “aboveground militant formation,” and one of its defining principles explicitly states: “We stand against white supremacy,” which it defines as “ a system of violence and power that ensures that political, economic, and social power is withheld from people who aren’t white.”

The organization doesn’t back away from the truth about white supremacy, explaining, “White working class people have all benefited to a certain extent from the system of white supremacy that exists within the United States.” It goes on to explain how adhering to such a system harms whites as much as it does whites:

In the moments when white working people have looked beyond their skin color and have worked alongside movements of poor and working class people of all races, the power of the ruling elite has been the most directly threatened. …

White supremacy is a system that white working people have helped protect, but it is also used as a tool against all working people, with people of color impacted the most severely. Allegiance to a politics of white racism has only allowed the rich to continue to hold onto power, with no lifting effect to working class folks of any race.

Redneck Revolt actually showed up at the Unite the Right rally in Charlottesville, Va., when, it says, it was asked by locals to provide security at Justice Park. Even though Redneck Revolt members were armed, ready and “refused to blink,” Shaun, from Pittsburgh’s chapter of Redneck Revolt, admits that they were surprised by the large number of fascists in attendance.

“All I can underscore is that we are at a historic moment where we are experiencing a fascist resurgence that feels like something out of the last century,” he said. “I can tell you—it might sound hyperbolic—but I saw thousands of Nazis that Saturday. And every one of them had the same expression on their face: They looked like a 10-year-old boy who enjoys terrorizing things weaker than it. They were looking at everything that doesn’t look like them like food.”

Redneck Revolt considers itself to be the opposite of right-wing groups like the Oath Keepers and the III% (aka the Three Percenters). Redneck Revolt members not only use their organizing power to recruit and protect communities, but they also meet with other militia groups to spread their message of anti-racism.

Redneck Revolt has filled its ranks with members like Russ, from the New Orleans chapter who described how he grew up poor, in a trailer on the edge of a rural Southern town. Explaining that no one in his family, including himself, attended college, he is the prototypical southern redneck, except he doesn’t adhere to white supremacy.

“I used to hold very reactionary right-wing views” Russ recounted. “I’ve learned over the years that there are a lot of similar correlations between growing up in the trailer park and growing up in poor urban areas and that we are all workers part of the same struggle. I’ve seen firsthand how the white working class has been manipulated by the right-wing Republican capitalist class to be foot soldiers of white supremacy and how urban progressive bourgeois liberal Democrats have written us off and left us out in the cold, it is time for that to stop and our group actively combats those trends. ”

While it seems like a difficult sell, Redneck Revolt continues to hammer home the one inescapable fact about white supremacy: “The greatest threat to those that pull the political and economic strings in this society is a unified resistance movement among poor and working-class people.” 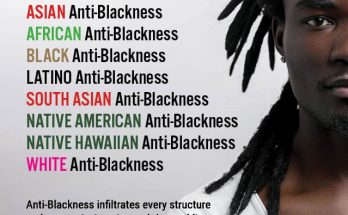