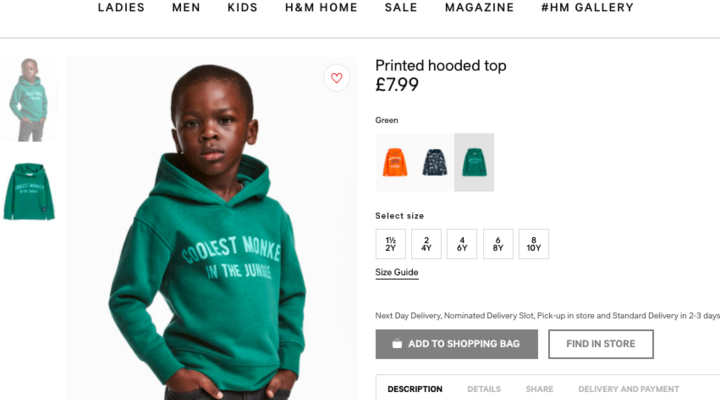 “This requires no second look to know it is wrong.”

H&M sparked outrage on social media over the weekend for posing a black child model in a sweatshirt emblazoned with the words “Coolest Monkey In The Jungle.” New York Times columnist Charles M. Blow drew attention to the image on H&M e-commerce site in the U.K. in a tweet […]

Reacting to the photograph, many netizens skewered H&M for what they described as tasteless and racist imagery:

I worked for them for years and they’re clueless sometimes. The head office in Sweden is very disconnected to issues of racism, cultural & social challenges. They seriously probably think this is cute.

Well for black people, the term is loaded. I was once given stickers with pictures of monkeys on them as a gift. Trust me, the intention of the so called gift was not innocent. The gift giver told me just what they thought of me. It went in the garbage.

While some netizens blamed carelessness, a lack of cultural awareness or bad styling decisions for the retailer’s mistake, others weren’t quite so forgiving.

“I am certain H&M is aware of the negative connotations presented,” wrote one Twitter user. Another said the choice to model a black child instead of a white child in this specific hoodie, which came in two other colors and designs, was no “accident.”

One person pointed out that the sweatshirt in orange ― with the words “Survival Expert” and “Junior Tour Guide” on it ― was modeled by a white child. “The entire narrative is a fail for 2018,” said the Twitter user.

The third design, a navy and white animal print with no words, was also modeled by a white child.

H&M has not responded to HuffPost’s requests for comment.