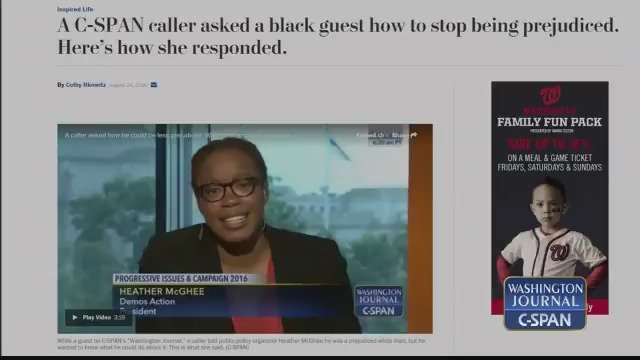 This is a reprint written by Colby Itkowitz for the Washington Post – August 25, 2017

A year ago this week, a white man named Garry from North Carolina called C-SPAN to talk to a black guest about his racial prejudices. He confessed that he feared black people and wondered how he might change his mindset. The guest, Heather McGhee, the president of Demos, a […]

A year ago this week, a white man named Garry from North Carolina called C-SPAN to talk to a black guest about his racial prejudices. He confessed that he feared black people and wondered how he might change his mindset. The guest, Heather McGhee, the president of Demos, a progressive public policy organization that advocates for equality, listened thoughtfully, nodding slowly. When he finished, she thanked him and then spoke to him empathetically about what he might begin to do to get over those fears, including getting to know black people on a personal level.

Over the next year, he would make at least one close African American friend: McGhee herself.

On Friday morning, near the end of a Washington Journal conversation about NFL player Colin Kaepernick kneeling during the national anthem last year, Garry Civitello called back into C-SPAN to share how that brief televised exchange with McGhee — which went viral last summer after The Washington Post wrote about it — had changed him.

He said he and McGhee have spoken by phone many times and are “personal friends.” What has helped him change his prejudices, he said, was open communication with people of other races as well as reading black history.

“There are so many things I did not know that I thought I knew,” he said. “I depended on the media for my information. I looked at television shows like ‘Cops’ and ‘Gangland’ and these programs that portray minorities in a negative way. I don’t have the opportunity to come from a diverse area. I live in the rural South.”

During a Washington Post Facebook Live interview with McGhee in April at the international TED conference in Vancouver, she discussed how she and Garry developed a relationship. (Watch that full exchange here.)

Not long after their C-SPAN exchange, he saw her on another news program that displayed her Twitter handle. He signed up for Twitter to reach out to her. (McGhee said his first tweet was: “How does this thing work?”) McGhee messaged him and gave him her phone number, and he called her the following day.

“As it turns out, just as the exchange had touched so many people, it had really deeply affected him,” she said. “He’s really done a transformation of his life and taken this on as a really mission-driven journey. He’s chronicling all the racism he observes and sees in his own friends’ circle and life, Confederate flags he’s never really noticed or seen the harm in before.”

McGhee went down to North Carolina to meet Garry in person several weeks before the 2016 election. They didn’t discuss politics then but did have a several-hour conversation about race relations and shared their personal histories as human beings, she said. After the election she called him. He wasn’t surprised Donald Trump had won — everyone he knew supported Trump — but he let her know that he did not vote for him.

“I think the journey he went on had a big part to play in him not wanting to be associated with the stereotyping and scapegoating going on in the campaign,” she said.

His work to overcome his prejudices over the past year has not only helped him reverse long-held stereotypes but has enabled him to view others’ struggles with empathy, Civitello said.

“I understand how our black counterparts feel, how our black counterparts feel neglected and targeted,” he said Friday. “When we get into groups that want to think like we think, we join groups with similar thinking, when we have ideas we can get on the Internet, even if you are a white supremacist or any kind of a nut, you can always get on the Internet and find someone that agrees with you, that makes your views okay.”

McGhee and Garry have broken down that silo. One relationship at a time.